From Heraldry of the World
Your site history : Sør-Trøndelag Defence District (FDI 12), Norwegian Army
Jump to navigation Jump to search 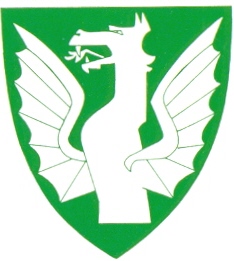 The Dragon Banner of Olav Haraldsson (St Olav) was captured from Magnus Olav's Son in the Battle of Vender. It was then placed in the Trondheim Cathedral in 1177. Here it symbolises the conection of the District to this Area, the HQ was situated next to the Cathedral. Green is the main Colour of the Colour of Sør-Trøndelag Infantry Regiment No 12. The District and Regiment are now disbanded.