From Heraldry of the World
Your site history : Sachsenhagen
Jump to navigation Jump to search 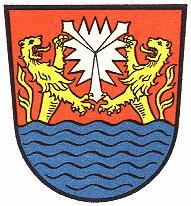 The first arms were granted to the city in 1561 by Count Otto IV of Schaumburg. These arms showed the so-called Nesselblatt (nettle-leaf) of the Counts of Schaumburg with in the base of the shield some waves, symbolising the Aue river.


When the city was acquired by Hessen-Kassel in 1650 the above arms were granted by Countess Amalie Elisabeth. The arms show the Nesselblatt and the waves, but two lions (of Hessen ?) were added.