From Heraldry of the World
Your site history : Saffron Walden
Jump to navigation Jump to search 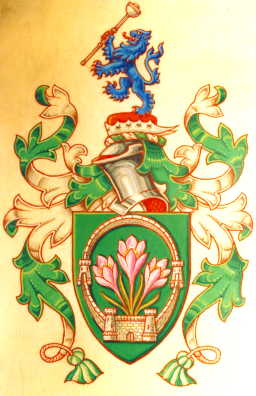 Arms : Vert within a representation of Town Walls having a Gateway between two Towers Argent three Saffron Flowers issuant from the battlements blown and showing stamens proper.
Crest : On a Wreath of the Colours upon a Chapeau Gules turned up Ermine a Lion rampant Azure grasping in the dexter paw a representation of the Ancient Mace of the Borough of Saffron Walden proper.

The arms were officially granted on November 20, 1961.

The earliest representation of the design which eventually became the arms of Saffron Walden appears on a seal dating from 1549, which was prepared after the town was granted a charter in February of that year by Edward VI. W.G. Benham in his book Essex Borough Arms suggests that the design was chosen as a pun of the name Saffron Walden - saffron (flowers) walled-in, and this is perhaps the most probable explanation.

The gateway and towers could also be seen as recalling the castle said to have been built by Geoffrey de Mandeville around 1100, however it had a short life and was abandoned around one hundred years after its building and quickly fell into ruin, long before the first seal was prepared.

The seal of 1836, depicted the three saffron flowers in various stages, one in bud, another in flower and the last fully open, signifying the three stages of the town's municipal history - its incorporation as a Commonalty in 1539, its flowering as a Municipal Borough in 1685 and its restructuring under the Municipal Corporations Act of 1835. Although the design has appeared on a shield in the form of arms for over three hundred, albeit with variations in colouring, it was not until 1961 that they we officially granted as such. Incidentally the 'saffron' part of the town's name refers to the cultivation of the saffron crocus at Walden from the time of Edward III until the eighteenth century.

Sometimes the 'arms' were embellished with a lion for a crest, this was perhaps a perpetuation of the lion which together with a dragon supported the 'arms' on a seal which was affixed to the gilt-silver mace procured after the town became a borough with full municipal privileges in 1685, upon the granting of a charter by James II. It seems likely that the crest granted in 1961 was suggested by the earlier lion. The chapeau is probably derived from the crest of the Braybrook family of Audley End and the Ancient Mace of the Borough is also depicted.

The arms are presently used by the town council.