From Heraldry of the World
Your site history : Saint Marylebone
Jump to navigation Jump to search 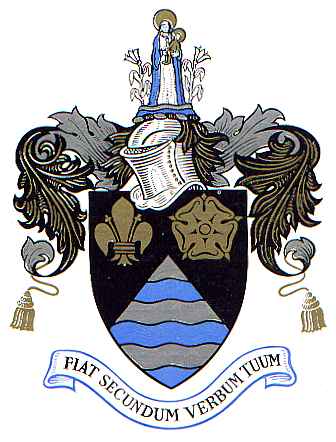 Arms : Parted chevronwise, the upper part of the shield black, and the base barry wavy of six pieces silver and blue; on the black, a fleur-de-lis and a rose, both gold.
Crest : On a silver and black wreath, two bars wavy silver and blue, and standing thereon between two white lilies with green stems and leaves, the Virgin Mary, proper, with a silver robe and a blue mantle, holding in her arms the Holy Child, proper, clad in gold.
Motto : Fiat secundum Verbum Tuum "Let it be done according to Thy Word"

The borough derives its name from an ancient chapel dedicated to St. Mary. The chapel was called St. Mary-le-Bourne; le Bourne meaning the Tyburn Brook, which is symbolised by the wavy bars.

The lilies and the rose were derived from the arms of Barking Abbey, which bore three white lilies and three gold roses on blue, within a red border charged with eight silver roundels.