From Heraldry of the World
Your site history : Salford
Jump to navigation Jump to search 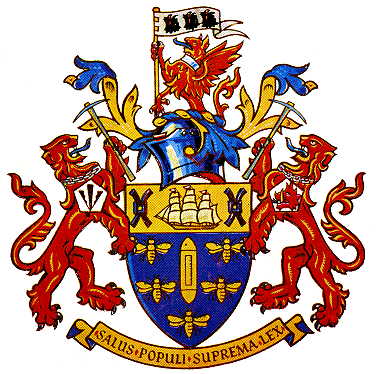 Arms : Azure a Shuttle erect between five Bees volant two two and one on a Chief Or a three-masted Ship of the 19th century in full sail proper between two Millrinds Sable.
Crest : On a Wreath of the Colours a demi Griffin Gules gorged with a Collar of Steel proper supporting a Staff Or flying therefrom a forked Pennon Argent charged with three Boars' Heads erased and erect in Fess Sable langued Gules.
Supporters : On either side a Lion Gules gorged with a Chain of Steel proper pendant therefrom a Pentagon Argent that on the dexter charged with a Pheon Sable that on the sinister with a Boar's Head erased Gules armed Or langued Azure and each holding in the interior forepaw a Miner's Pickaxe proper.
Motto: 'SALUS POPULI SUPREMA LEX' - The welfare of the people is the highest law.

The arms combine elements of the former arms of the five constituent authorities, as indicated below.

The shield retains, from the former Salford arms, the blue background with a gold 'chief', giving the heraldic colours of the Earls of Chester, from whom Salford received its first charter in AD 1230. Also from Salford are the gold shuttle and five bees, representing the growth of five industrial communities round a centre of the textile industry, and the two black millrinds (the iron centres of millstones) as symbols of engineering. From Eccles comes the ship, signifying the importance of waterways in the area.

The crest is one of the former Eccles supporters. The boars' heads were also seen in the Irlam arms and the circlet of steel round the griffin's neck was part of the Irlam crest, symbolising the town's great industry.

The supporters are similar to those of Swinton and Pendlebury. Each lion is collared with a steel chain (a further symbol of engineering) holding a white pentagonal medallion. On one medallion is the black 'pheon', or broad arrow, which, with the red lion, appeared in the arms of Worsley, whilst on the other is the boar's head from the crest of Swinton and Pendlebury, shown in that borough's livery colours of red and gold.

The motto is that formerly used by Swinton and Pendlebury and means "The welfare of the people is the highest law". 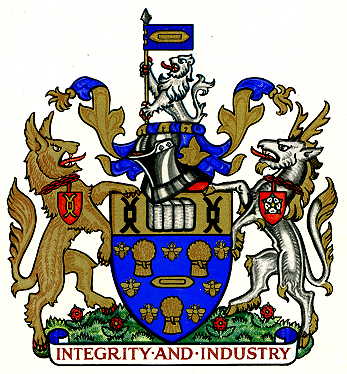 The arms were officially granted on November 5, 1844; crest and supportes were granted one day later.

The shuttles on the shield and banner represent the textile industry in the borough, while the millrinds represent the engineering industry. The garbs are taken from the arms of the Earls of Chester, from whom Salford obtained its first charter in AD 1230. The bees are a symbol of industry.

The sinister supporter is a mythical beast, called antelope but bearing no resemblance to the natural antelope.