From Heraldry of the World
Your site history : Salisbury and Wilton
Jump to navigation Jump to search 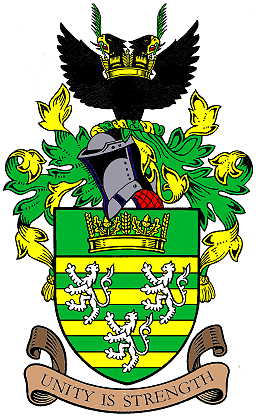 Arms : Barry Or and Vert three Lions rampant Argent on a Chief of the second a Coronet composed of four Ears of Wheat and as many Acorns leaved alternately set upon a Rim Gold.
Crest : On a Wreath of the Colours a demi double-headed Eagle wings displayed Sable gorged with a Naval Crown Or and holding in each beak a Branch of Palm proper.
Motto: 'UNITY IS STRENGTH'

The arms were officially granted on November 20, 1959.

The double-headed eagle is that of the Earls of Radnor, who are seated at Longford Castle, it can also be seen as a reminder of the supporters of the City of Salisbury's arms. The naval crown and palm branches from the Nelson family arms, who were connected with Trafalgar House, which was given to the family of Lord Nelson by a greatful nation in 1814.

This appropriate civic motto is also of local significance, it figures in a banner carried by the vil­lagers of Wishford on Oak Apple Day at the Grovely Oak ceremony.