From Heraldry of the World
Your site history : Sandwell
Jump to navigation Jump to search 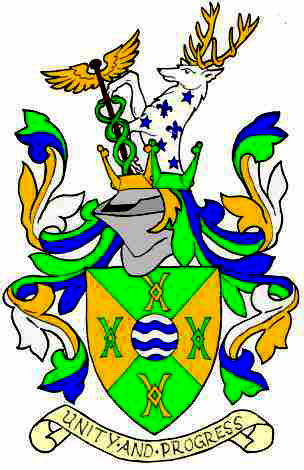 Arms : Per saltire Vert and Or four Fers de Moline counterchanged in fess point a Fountain.
Crest : Issuing out of a Saxon Crown per pale Or and Vert a demi Stag Argent semy of Mullets and Fleurs de Lys Azure attired Or holding between the forelegs a Caduceus the staff proper winged Or and entwined by two Serpents Vert; Mantled Vert and Azure doubled Or and Argent.
Motto: 'UNITY AND PROGRESS'

The arms were officially granted on 4th July 1974

The green and gold and per saltire division of the shield is taken from Warley's arms. The four mill-irons were part of West Bromwich's arms. They symbolise the metal industries of the area. The gold flanks and central fountain represent the borough's name "Sand-Well". The name itself was that of an Abbey that lay near the boundary of the two boroughs.

The Saxon crown in the crest repeats the colours of the shield. The stag was used by West Bromwich. He is charged with blue stars and fleurs-de-lis representing the sparkling water of Sandwell Spa. The caduceus, taken from Warley's arms is a symbol of commerce.

The motto was inherited from Warley.