From Heraldry of the World
Your site history : Sankt Ingbert
Jump to navigation Jump to search 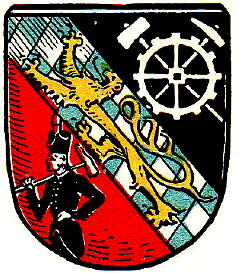 The arms show a bend in the colours of Bayern, with the lion of the Pfalz. Until 1947 the area officially belonged to the Pfalz region of the Kingdom of Bayern. The miner's tools, the miner and the cog-wheel refer to the mining and industry in the city.

The arms were replaced on August 11, 1947 by the arms below, which in turn were abolished after the merger of 1974. 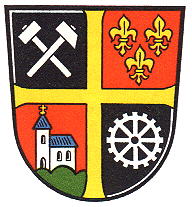 In these arms the tools and wheel from the old arms remained. The lilies in the second quarter refer to the medieval Knights of St. Ingbert. The small chapel in the third quarter shows the legendary Ingobertuskapelle in the city.