From Heraldry of the World
Your site history : Sankt Ingbert (kreis)
Jump to navigation Jump to search 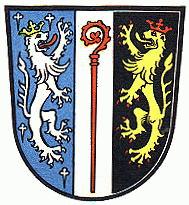 The arms are a combination of the lions of Saarbrücken and the Pfalz and represent the parts of the district that belonged to Nassau-Saarbrücken and the (Kur)Pfalz. The pale is taken from the arms of the Von der Leyen family, who had large possessions in the district from the 15th century until 1792 (and also abroad, see Simpelveld in the Netherlands). They had one of their castles in Blieskastel.

The crosier represents the areas in the district that belonged to several monasteries.