From Heraldry of the World
Your site history : Sawston
Jump to navigation Jump to search 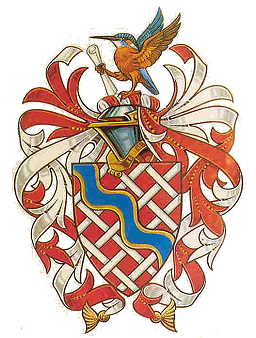 Arms : Gules fretty Argent a Bend wavy Azure fimbriated Or.
Crest : On a Wreath of the Colours a Kingfisher wings elevated and addorsed grasping in the dexter claw a Roll of Parchment proper.

The white frets on red are derived from the arms of the Huddleston family, owners of the Sawston estate from 1517 until the 1980s. The wavy blue band refers to the River Cam, from which much of the Village's prosperity has been derived.

The kingfisher is a local inhabitant and bears a scroll of parchment or paper. This refers to the leather, parchment and paper industries, that have been know in the village since the eighteenth century.