From Heraldry of the World
Your site history : Scarborough (Ontario)
Jump to navigation Jump to search 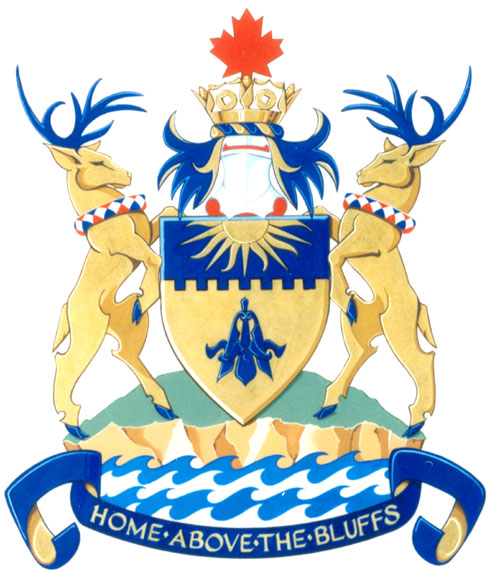 Arms : Or a columbine flower and a chief embattled Azure issuant from the upper chief a demi-sun Or.
Crest: Issuant from a coronet heightened with four ears of corn (one and two-halves visible) alternating with four millstones (two visible) Or a maple leaf Gules.
Supporters: Two stags Or attired and unguled Azure each gorged with a collar of braid Gules Argent and Azure standing upon a representation of the Scarborough Bluffs proper rising above the waters of Lake Ontario Azure and Argent.
Motto: HOME ABOVE THE BLUFFS

The arms were officially granted on February 1, 1996.

Blue and gold are the City's official colours. The embattlement represents the Scarborough Bluffs and alludes to the City's function to protect and nurture its people. The columbine is the floral emblem for Scarborough. The radiant sun suggests Scarborough's location in the Metro Toronto, as the rising sun first shines on Scarborough.

The ears of corn in the crown represent Scarborough's agricultural industry and the millstone alludes to commerce. The corn also honours the First Nations, the first inhabitants of this region. The millstones in the crown, when viewed as an Asian cash coin, refer to the most recent immigrants. The maple leaf is a reference to Canada and its multicultural vitality represented in the citizens of Scarborough.

The deer are indigenous to the Scarborough area. The stag also appears in the arms for the City of Scarborough in England, emphasizing the connection between the two municipalities. The deer stand on a rendition of the bluffs, which recalls the principal geographical feature of the City. The pattern of the collars refers to the interweaving of individual and corporate needs. The colours allude to the earliest settlers from Britain