From Heraldry of the World
Your site history : Seaton
Jump to navigation Jump to search 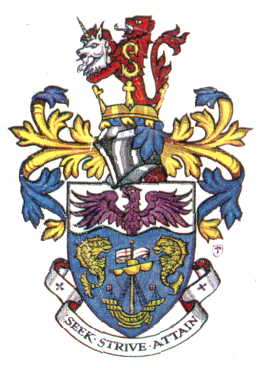 Arms : Azure a Lymphad sail furled Or flying Flags and Pennon of St. George between in chief two Dolphins haurient respectant Or on a Chief wavy Argent a demi Eagle issuant wings displayed Purpure.
Crest : On a Wreath of the Colours out of a Saxon Crown Or a demi Lion Gules charged on the shoulder with two Crozier-Heads conjoined in the form of a letter S Or and holding on the paws a Unicorn's Head erased Argent.
Motto: 'SEEK STRIVE ATTAIN'

The blue background and wavy 'chief' combine to suggest the sea washing the pebble beach. The ancient ship refers to Seaton's early importance as a small port, and with the flags of St. George, to the contribution of the town to the English Fleet at Calais in 1346. The two dolphins indicate the ancient fishing industry and the modern seaside resort, the dolphins being a symbol of playful friendlyness. Two dolphins also supported the arms of the Trevelyan family, who were Lords of the Manor. The purple eagle alludes to the Roman history of Seaton, where a considerable site is thought to be a station of the second of Vespasian.

The Saxon crown refers to some of Seaton's earliest history. The red lion is from the arms of the County Council and also forms part of the traditional arms of St. Gregory, patron saint of the Parish. The unicorn's head is from the crest of the Head family, who were prominent in Seaton's development since 1607.

The arms are continued by the town council.