From Heraldry of the World
Your site history : Spennymoor > Sedgefield
Jump to navigation Jump to search 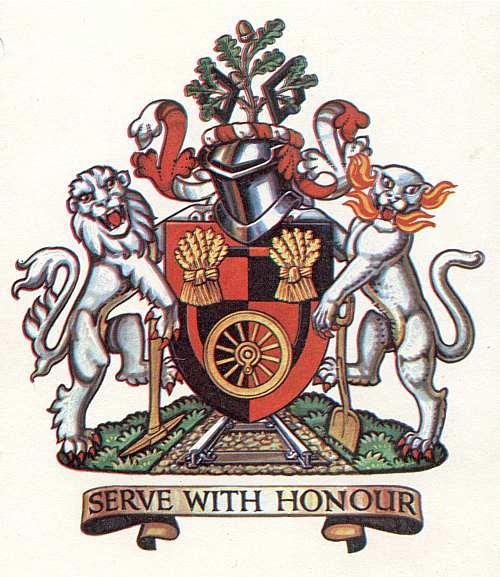 Arms : Quarterly Gules and Sable an Orle counterchanged over all in chief two Garbs and in base a Locomotive Driving Wheel Or.
Crest : On a Wreath Argent and Gules an Oak Sapling of three branches the centre branch fructed proper the other two each enfiled by a Mascle Sable.
Supporters : On the dexter side a Lion guardant Argent resting the dexter forepaw upon a Pick head downwards Or and on the sinister side a Panther also Argent incensed proper resting the sinister forepaw upon a Shovel Or all upon a Compartment composed of a Grassy Mound with a Railway Track set palewise thereon proper.
Motto: Serve with honour

The red and black shield is based on the Spennymoor arms, because of the council headquarters being based in the town. The wheel is a rail wheel and shows the Shildon link with British Rail Engineering. The two sheaves of corn are for Sedgefield RDC and Darlington RDC showing the link with farming etc, within the area. These are all interlinked by the second inner shield showing the merger of the four authorities into one.

The two black diamonds in the crest are the symbols for coal. The centres have been removed showing that the coal is gradually being superceded by the new development of industry. The acorn and oak tree growing through the diamonds show that Aycliffe, which is the Saxon for acorn, is representing the new industrial concept and new town growth taking over gradually and growing steadily through and replacing the coal industry in the district.

The lion supporter on the left is the derived from the County Durham. The panther in heraldic terms is a symbol of the engineering in the area with the furnace of fire shown coming from its mouth. Both are holding the pick and shovel as a reminder of the coal-mining era no longer within the district.

The council's motto is SERVE WITH HONOUR. 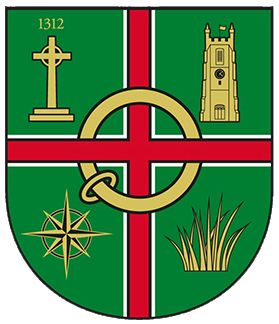 The arms were designed in the 1980s and are not officially granted.

The arms show as Saint George’s Cross and Sedgefield Bull Ring, which is synonymous with the famous Shrove Tuesday Ball Game in the town.

The original four emblems associated with the town have been preserved within each quadrant of the shield. These are as follows: the Market Cross which was erected on Cross Hill in 1312 (when Sedgefield was granted the right to hold a market); St Edmund’s Church; a sprig of Sedge grass from which the town name is thought to derive; and a compass which represents the eight main thoroughfares on which Sedgefield stands.