From Heraldry of the World
Your site history : Settle
Jump to navigation Jump to search 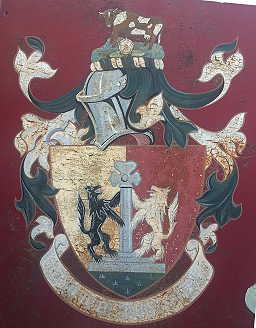 Arms : Per pale Or and gules, on a mount in base a representation of the Market Cross of Giggleswick proper supported by a lion azure and a lion argent.
Crest : On a wreat argent and vert, In front of a representation of the summit of Ingleborougb, thereon a Craven heifer statant guardant proper, a rose argent,barbed, seeded, slipped and leaved proper. Mantled vert doubled argent.
Motto: Cavendo tutus adversa sperno.

The arms were officially granted on November 20, 1964.

The central feature is the 14th century market cross in Giggleswick, supported by two rampant lions – blue for the Percys and white for the Mowbrays. These were two of the most powerful families in medieval times and held most of the Settle area.

The crest shows the summit of Ingleborough, the second highest mountain in the Yorkshire Dales on this is a Craven heifer. The heifer was a local cow which was born in 1807 and achieved nationwide fame due to its size. The white rose is for Yorkshire.