From Heraldry of the World
Your site history : Shaar Hashomayim, Montreal
Jump to navigation Jump to search 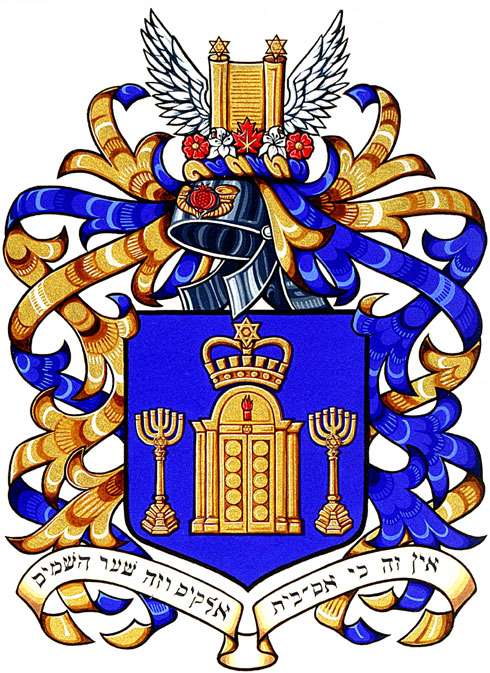 Azure between two menorot a representation of the Holy Ark Or charged on the tympanum with a flame issuant from a vessel Gules the ark ensigned by a closed crown topped with a magen David also Or; Crest : Between two eagle wings displayed Argent highlighted Sable rising from a circlet of roses Gules seeded Or alternating with lily flowers Argent and maple leaves Gules veined Or an open Torah scroll each roll tipped with a magen David Or

Blue is considered an ancient and important colour in Judaism. The Holy Ark refers to the Gates of Heaven and the Congregation’s historic name and purpose. The menorah represents learning and assembly in Judaism. The menorah and the Ark, also symbolizing prayer, suggest the ancient threefold purpose of each synagogue. The crown surmounted by a Star of David refers to the majesty of God and the gold is a reference to the riches of heaven and earth.

The floral crown honours Canada with the maple leaf, Quebec with the lilies, and England with the roses. The rose is also a reference to Montreal, and was found in the first coat of arms created for the city in 1837 by Mayor Benjamin Viger. The Torah symbolizes the Law that forms the basis of Judaism. The helmet decorated with the pomegranate and cornucopia commemorates a battle between the Maccabeans and the Romans that restored the independence of Judea. It recalls the determination and ingenuity of the ancient Jews as they fought for freedom. The white eagle wings outlined in black honour the Polish and German ancestry of Shaar Hashomayim’s founders. Together with the rose, these eagle wings recall the title of the first charter of 1846 incorporating the Congregation Shaar Hashomayim as the earliest Ashkenazi synagogue in Canada. Lastly, the wings refer to the passage into Heaven and are based on the blessing of Isaiah 40:31 which reads, “They that wait for the Lord shall renew their strength; they shall mount with wings as eagles. They shall run and not be weary. They shall walk and not faint.”

The motto is from Genesis 28:17 and means “This is none other than the House of God and this the Gate of Heaven”. This motto underscores the Congregation’s name and repeats the themes of the Arms.