From Heraldry of the World
Your site history : Sheringham
Jump to navigation Jump to search 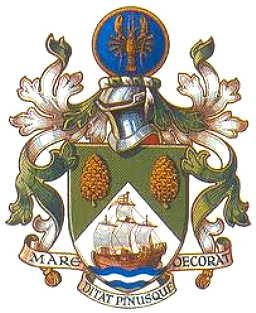 Arms : Per chevron Vert and Argent in chief two Pine Cones Or and in base on Water barry wavy a three-masted Fishing Vessel of the sixteenth century in full sail proper.
Crest : On a Wreath of the Colours a Hurt fimbriated and charged with a Lobster Or.
Motto: 'MARE DITAT PINUSQUE DECORAT' - The sea enriches and the pine adorns.

The two pine cones on a field of green represent the pine woods behind the town, and below there is a sixteenth century fishing vessel in full sail.

The lobster in a ring of gold signifies the wealth of Sheringham is derived from the sea.