From Heraldry of the World
Your site history : Silsden
Jump to navigation Jump to search 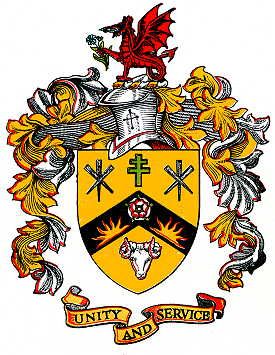 Arms : Or on a Chevron Sable between in chief a patriarchal Cross Vert on either side thereof three Sparrow-Bills two in saltire and one in pale points downwards of the second and in base a Ram's Head caboshed proper a Rose Argent barbed and seeded also proper between two demi Suns Gold.
Crest : On a Wreath of the Colours a Wyvern Gules grasping in the dexter claw a Sprig of Flax slipped leaved and flowered proper.
Motto: 'UNITY AND SERVICE'

The arms were officially granted on October 6, 1954

The chevron is taken from the arms of the Jennings family, who held the Manor of Silsden as early as 1487, and the double cross denotes the town's connections with the Knights of St. John of Jerusalem who held lands at Silsden previously in the possession of the Knights Templar. It is coloured green to represent land. The three shoe-nails or "sparrow-bills" on each side of the cross, recall the old nail-making industry of Silsden from 1744 until recently. The ram's head typifies both the woollen industry, which played such a large part in the history of Silsden, and the farming industry of the outlying districts. The white rose refers to Yorkshire and the sun's rays were adopted to represent the rayon industry, now the principal industry of the town.

The red wyvern is adapted from the arms of the Clifford family of Skipton Castle, Earls of Cumberland and ancient lords of the Honor of Skipton in which Silsden was an important manor. The flax flower denotes the ancient flax-growing industry of Silsden Moor in the 18th century to meet the demand for cordage and sail for the rapidly expanding Royal Navy.