From Heraldry of the World
Your site history : Simon's Town
Jump to navigation Jump to search 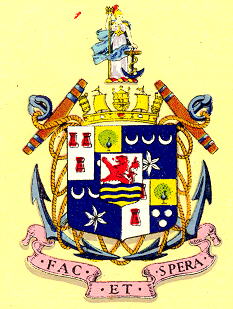 Arms: Quarterly: I and IV, per pale, the dexter Argent, three towers placed 2 and 1 Gules, the sinister per fess Or and Azure, in chief on a mount Vert a peacock in his pride proper and in base three plates placed 2 and 1 Argent; II and III, Azure, an estoile and in chief three crescents Argent; over all an oval cartouch with scrolled edges Or, charged with a demi-lion rampant Gules, issuant from three barrulets wavy Vert. The shield ensigned of a naval crown or, issuant therefrom a representation of Brittania supporting with the dexter hand a trident and with the sinister hand a fouled anchor proper. Behind the shield two anchors in saltire proper, cabled Or.
Motto: FAC ET SPERA

The arms were officially granted on September 27, 1957.

Simon's Town is named after Simon's Bay, which in turn was named after Simon van der Stel, who was governor of the Cape of Good Hope from 1679 to 1699. The town became a municipality in 1882, and it adopted arms in 1906.

The arms were based on the arms of Simon van der Stel. However, the designer was not sure that the drawing of Van der Stel's arms which he had was correct, and so he made enquiries in Amsterdam. The mayor of Amsterdam sent him a drawing of the arms of Simon's son Wilhem Adriaen van der Stel (who was governor of the Cape 1699-1706). Bonn assumed that father and son would have had identical arms, and so based the Simon's Town arms on those of Wilhem Adriaen. However, father and son did not have identical arms, but that fact was not discovered until many years later.

The first and fourth quarters of the arms were the Van der Stel family arms, while the second and third quarters were the arms of Wilhem Adriaen's mother (i.e. Simon's Wife) Johanna Six. The escutcheon was supposed to be the arms of Oud Vossemeer (with a red fox) , but someone mistook them for the arms of Zeeland (with a red lion) instead. The crossed anchors, the naval crown, and the figure of Britannia allude to Simon's Town's importance as a naval base.

So the Simon's Town municipality actually bore a variation on the arms of Wilhem Adriaen (whom South African history generally regards as a villain) instead of those of his father, after whom the town was indirectly named.