From Heraldry of the World
Your site history : Solihull
Jump to navigation Jump to search 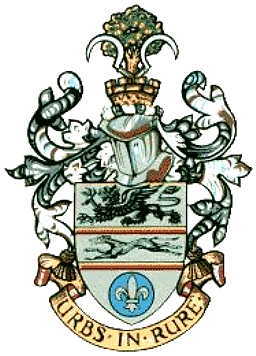 Arms : Argent within two Barrulets Gules between in chief a Griffin passant Sable and in base a Hurt thereon a Fleur-de-Lys Argent a Greyhound courant Sable.
Crest :On a Wreath Argent and Sable issuant from the Battlements of a Tower in front of a Oak Tree proper fructed Or two Sickles the shafts in saltire the blades upward and outward proper.
Motto: 'URBS IN RURE' - The town in the countryside.

The crest with its battlements, sickles and oak tree with golden acorns represent the rural and agricultural nature of the Forest of Arden.

The motto is taken from the old arms. 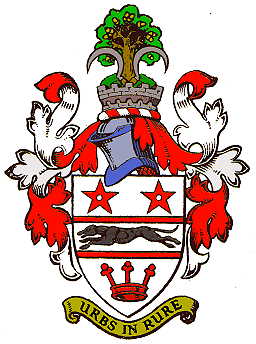 Arms : Argent within two Barrulets between in chief as many pierced Mullets and in base a Saxon Crown Gules a Greyhound courant Sable.
Crest :On a Wreath of the Colours issuant from the Battlements of a Tower a Mount thereon an Oak Tree eradicated proper fructed Or in front thereof also issuant two Sickles the hafts in saltire and blades outwards also proper.
Motto: 'URBS IN RURE' - The town in the countryside.

The arms were officially granted on September 10, 1948.

The two pierced mullets are derived from the arms of the Odingsell family, who held the Manor of Ulverley in the 13th century. The two barrulets are from the arms of Sir George Throckmorton or Throgmorton of Coughton Court, who purchased the Manor from the Crown in 1528. The red crown alludes to the rather slender association of the Saxon kings with the Manor, for at the time of the Domesday Survey Ulverley was held by Cristina, sister of Edgar Atheling, king of the English for the brief period between Harold's death at Hastings and William's entry into London. The manors of Ulverley and Longdon were joined to form the parish of Solihull in the 13th century. The greyhound commemorates the Greswold family of Malvern Hall, who were for many generations during the 18th and 19th centuries the most influential family in Solihull.

The oak tree indicates that the district was formerly part of the Forest of Arden, and the tower and sickles show that while it includes considerable residential areas parts of it are still mainly agricultural. This theme is also the significance of the motto.