From Heraldry of the World
Your site history : South Cambridgeshire
Jump to navigation Jump to search 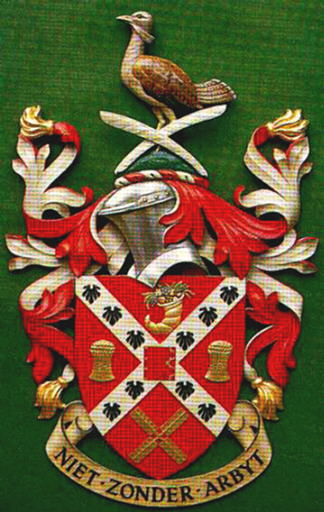 The shield retains the red background and ermine saltire charged with a red book edged and decorated gold which were the basis of the Chesterton arms. These commemorate the crossing of ancient roads in the district, including Ermine Street, and also many connections with the University of Cambridge.

The book also alludes to the unique system of Village Colleges in the county, many of which are in the new District.

As in the Chesterton arms, a gold cornucopia filled with fruit and flowers represents the orchards, nurseries and preserving industries. Below the saltire, the sails of a windmill, also in gold, as in the Chesterton arms, suggests the mechanised agriculture of the area and notable windmills at Bourn, Madingley and Chishill. In the flanks of the shield, two gold sheaves indicate the union of two rural districts to form the new authority. The wheatsheaf was the only emblem in the South Cambridgeshire Rural District Council seal and this appropriate symbol is thus preserved.

From the Chesterton crest comes the Cambridgeshire bustard on a small grassy mound. For necessary distinction are added two crossed quill pens to indicate the literary associations of the district with writers such as Chaucer, Tennyson, Rupert Brooke, Pepys, Matthew Paris and Byron.The Chesterton motto is retained; it is that inscribed on a house in Fen Drayton associated with Vermuyden, the famous fen drainer: "Niet Zonder Arbyt"-"Nothing without effort/work" - the only Dutch motto in British civic heraldry.