From Heraldry of the World
Your site history : South Derbyshire
Jump to navigation Jump to search 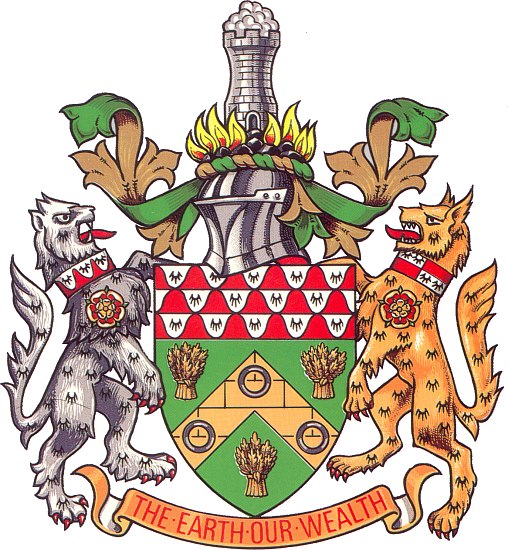 Arms : Vert on a Chevron Or masoned Sable between three garbs Or a like number of Annulets also Sable a Chief vairy Ermine and Gules.
Crest : On a Wreath of the Colours upon a Mount Sable inflamed a Tower Argent rising therefrom Clouds of Steam proper.
Supporters : On the dexter side a Lion Ermine gorged with a Collar vairy Ermine and Gules and on the sinister side a Wolf Erminois gorged with a Collar quarterly Ermine and Gules each charged on the shoulder with a Rose Gules barbed proper thereon another Argent barbed and seeded also proper.
Motto: 'THE EARTH OUR WEALTH'

The arms have a green field, suggesting the largely rural nature of the district. On this is placed a gold chevron, masoned sable. This suggests the local yellow brick industry. The chevron is charged with black rings for iron pipe manufacture. The garbs are for agriculture, but also resemble the arms of Ranulph de Blunderville, Earl of Chester, whose widow Matilda, moved his priory to Repton. The three rings and three wheatsheaves also suggest the three councils combined.

The chief is in a red and ermine vair pattern, from the arms of the Gresley family.

The crest has a black mound issuing flames, for coalmining anf fireclay. From the mound rises a tower issuing clouds. The tower is derived from the arms of the Stanhope Earls of Harrington, and with the clouds suggests the cooling towers of Drakelow Power Station.

The supporters also represent the Gresley and Stanhope families. The ermine lion comes from the Gresley crest, and has a collar of red and ermine vair pattern. The erminois wolf was a supporter of the Earl of Harrington's arms, and the collar is derived from the Stanhope arms.