From Heraldry of the World
Your site history : South Herefordshire
Jump to navigation Jump to search 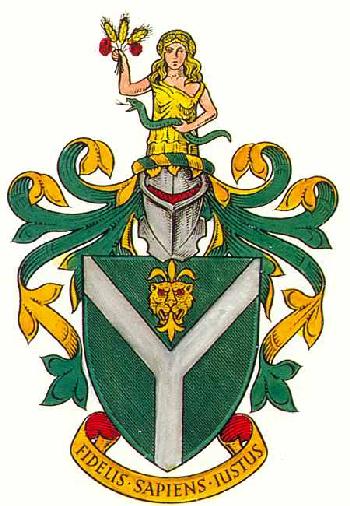 Arms : Vert a Pall Argent in chief a Leopard's Face jessant de Lys Gold.
Crest : On a Wreath Or and Vert, a demi Figure representing Demeter affronty proper crined and wreath about the temples with Ears of Corn habited in a flowing sleeveless Gown Gold holding aloft in her dexter hand three Ears of Corn between two Poppies slipped proper and with the sinister hand grasping to her front a Serpent undulating head to the dexter Vert; Mantled Vert doubled Or.
Motto: 'FIDELIS SAPIENS JUSTUS' - Honest, thoughful, just.

The arms were officially granted on February 29, 1988.

The principal figure in the shield is the shape of Y, and this is the pallium or pall and can be seen as an illusion to the River Wye. It has also been suggested that perhaps it could refer to Symonds Yat. The Y itself is in fact silver coloured to suggest the surface of the water.

The pallium also occurs in some ecclesiastical arms and can, therefore, be seen as a reference to the Diocese of Hereford. The arms of the Diocese includes the ancient device of a leopards head reversed with the fleur-de-lis, and in fact was included as part of the Coat of Arms of St. Thomas de Cantilupe, Bishop of Hereford from 1275 to 1282.
The leopard's head has been placed between the arms of the pallium to suggest the way in which the district encloses the city and the cathedral.

The figure in the crest represents Demeter, a Greek Goddess, sister to Zeus. Demeter was depicted in the badge of the Ross and Whitchurch Rural District Council. Demeter is the Greek Goddess of Agriculture and is seen with representations of corn and poppies, and she is also usually accompanied by a snake. She symbolises, of course, the pastoral nature of much of the district, as does the colour green which is the background to the shield.

The motto "Fidelis Sapiens lustus" denotes "honest" (honest in their deliberations), "thoughtful" (thinking all matters through) and "just" (just in their decisions).