From Heraldry of the World
Your site history : South Kesteven
Jump to navigation Jump to search 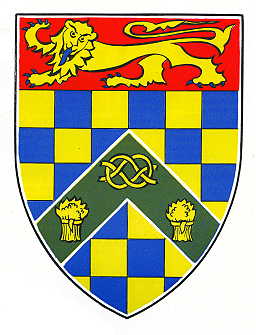 Checky Or and Azure on a Chevron Vert a Wake Knot between two Garbs Or on a Chief Gules a Lion passant guardant Or.

The gold knot, the badge of the Wakes, is taken from the arms of the Bourne UDC, of which they were lords in medieval times. At the head of the shield is one of the Royal Lions of England, which formed part of the arms of Stamford.