From Heraldry of the World
Your site history : South Norfolk
Jump to navigation Jump to search 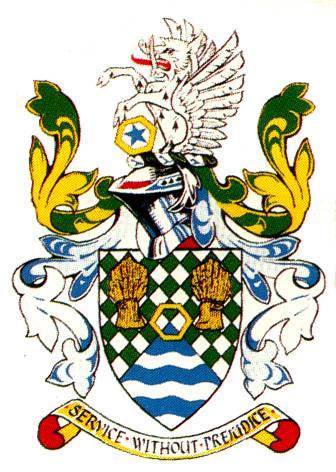 Arms : Per chevron lozengy Argent and Vert and barry wavy of six Azure and Argent in chief two Garbs and in the fess point a Hexagon [voided] Or.
Crest : On a Wreath of the Colours a demi-Boar Ermine langued Gules between two Wings addorsed Argent resting the sinister hoof upon a Hexagon Or enclosing a Mullet Azure; Mantled parted Vert and Azure doubled parted Or and Argent.
Motto: 'SERVICE WITHOUT PREJUDICE'

The background of the shield symbolises the Broads, the wavy lines indicating water, and the land, which is chequered green and silver, to represent sugar coming out of the land. The essentially agrarian economy of the District is symbolised by the sheaves of wheat. The hexagon is a reference to the new Council Offices in the centre of the District.

The crest refers to the families of Bacon and Colman, both prominent in the district. The boar reflects the crest of Bacon and the wings that of Colman. The boar holds the hexagon within which is a five pointed star, symbolising the five old authorities which came together to form the new District.

The wreath reflects the principal colours of the arms, while the green and blue mantling symbolises land and water.