From Heraldry of the World
Your site history : Special Troops Battalion, US Army South, US Army
Jump to navigation Jump to search 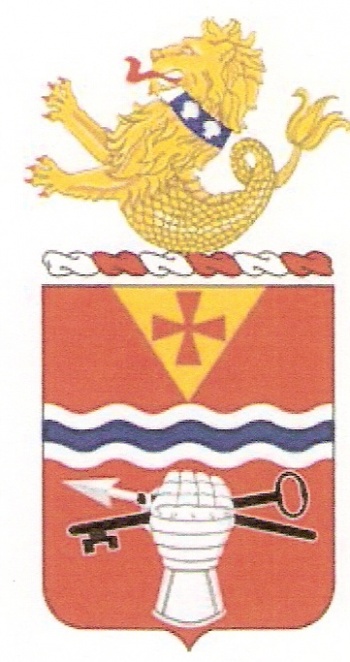 Shield: Gules, on a fess wavy Argent between in chief a pile Or charged with a Maltese Cross of the first and in base a gauntlet, palm inward, of the second holding a demi-spear Sable,
edged and garnished of the second, the spearhead Argent (Silver Gray), point upward and a key, of the fourth, ward downward, edged of the second in saltire, a bar wavy Azure.
Crest: From a wreath Argent and Gules, a sea lion rampant Or, eyed, langued and clawed of the second collared Azure charged with two escallop shells of the first.
Motto: Americas Sustentans = Supporting the Armericas

The waves symbolise travel and suggests the Battalion's capability to deploy to any contingency operation, in a timely manner. The pile alludes to the unit's military support in humanitarian assistance/disaster relief. The Red Cross from the sails of the Spanish Galleons symbolise the rich Spanish history of the Battalion's area of operations. The Gauntlet symbolises strenght and readiness of the Battalion. The demi-spear symbolises the reach of the Battalion's ability in sustaining the figth against Terrorism, while increasing security and coalition cooperation. The Key denotes logistical support. The Sealion in the Crest alludes to decorations awared for opeations in the Philippines during World War II. The Collar alludes to control rendered during military operation. The Escallops denote travelling to far places. The Coat of Arms was approved 16 July 2008.