From Heraldry of the World
Your site history : Spelthorne
Jump to navigation Jump to search 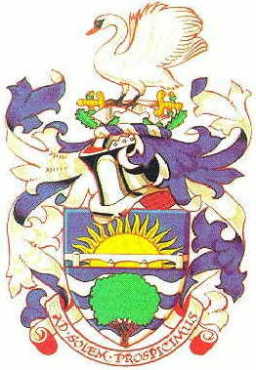 Arms : Per fess Azure and barry wavy of six Azure and Argent in chief in front of a rising Sun Or a representation of Staines Bridge issuant and in base a Thorn Tree proper.
Crest : On a Wreath of the Colours between two Sprigs of Oak each fructed of as many Acorns two Seaxes in saltire points downward proper hilts and pomels Or perched thereon a Swan rousant proper.
Motto: 'AD SOLEM PROSPICIMUS' - We look towards the Sun.

The shield is divided by a straight line across the middle. In the lower half alternate waves of blue and white, common to both Councils' Arms represent the Thames. Against them stands a thorn tree recalling the famous tree which gave its name to the ancient Hundred of Spelthorne in Middlesex. Spanning the waves is Staines Bridge, and behind it rises the allusive sun from Sunbury's Crest, against a background of blue. As well as alluding to Sunbury, the sun suggests the dawn of a new life for Spelthorne.

The crest shows upon two crossed seaxes (Saxon swords), common to both Councils' Arms, is perched a swan representing the River Thames, an important factor in the life of the Borough. Whilst the swords suggest two former Middlesex authorities, the new Borough in Surrey is symbolised by two sprigs of oak, each of two acorns, from the Surrey County Council's Arms.

The motto is a combination of Staines' Ad Pontes Prospicimus ("At the Bridges we look forward") and Sunbury's Sol Et Paster Deus ("God is my Sun and my Shepherd") in the sentence Ad Solem Prospicimus. Literally "We look towards the Sun", the motto implies that "We face the dawn of a new civic era".