From Heraldry of the World
Your site history : St. Pancras
Jump to navigation Jump to search 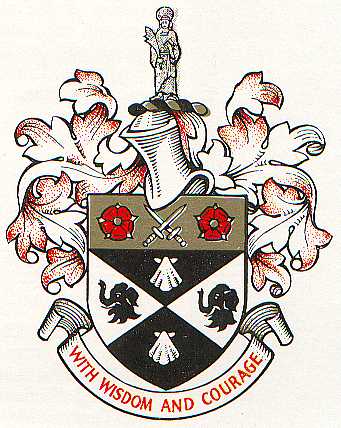 Arms: Per saltire Sable and Argent two Escallops in pale and two Elephants' Heads erased in fesse countercharged on a Chief Or two Swords in saltire proper between two Roses Gules barbed and seeded also proper.
Crest: On a Wreath Argent and Sable a Figure of Saint Pancras holding a Book and Palm as represented on a brass at Cowfold in Sussex [Or].
Motto: 'WITH WISDOM AND COURAGE'.

The crest shows a figure of St. Pancras holding a book and a palm, as represented on a brass at Cowfold in Sussex.

Prior to 1931 the borough used the (unofficial) arms below: