From Heraldry of the World
Your site history : Stafford
Jump to navigation Jump to search 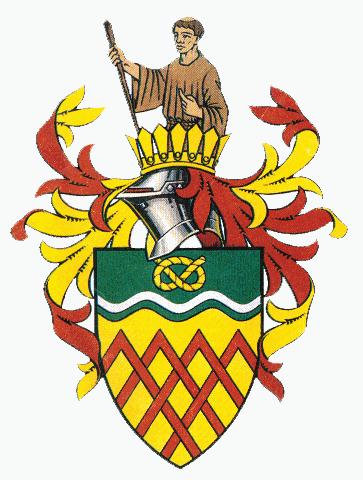 Arms : Or four Chevronels interlaced Gules on a Chief wavy Vert below a Stafford Knot of the first a Barrulet wavy Argent.
Crest : Out of a Palisdado Crown Or a demi figure representing St. Bertelin supporting with the dexter hand a Staff all proper.

The shield shows four red interlaced chevrons on a gold ground, signifying the four former local authorities now "embraced" to comprise the new Borough. The livery colours are those of the Stafford family - gold, a red chevron. The green chief betokens the pastoral and agricultural nature of the area, dominated by a Stafford Knot (see below) in gold, whilst the narrow wavy silver band, following the contour of the chief, represents the river Trent which, flowing through the area, also marks the boundary between the two English Heraldic provinces of Norroy and Clarenceux.

The crest is the figure of St Bertelin, holding a staff, an allusion to the name of the town, issuing from a palisado crown in reference to Stafford Castle, formerly overlooking the town from the east. The first castle, built c 1069, was essentially an earth fortification with a stockade for defence, hence the "palisado" crown in distinction to the more usual "mural" crown adopted by some municipal authorities.

The legend of St Bertelin derives from the 14th century account of him by Capgrave in his "Nova Legenda Anglie", retold by Dr Robert Plot in his "Natural History of Staffordshire" (1686). He is reputed to have been the son of the Mercian prince, the friend and disciple of St Guthlac who, after St Guthlac's death c 700, continued his holy vocation on the islet of Betheney now Stafford. Here, he remained until forced to retreat from the ill-will of jealous detractors, when he repaired to Ilam, in Dovedale, Derbyshire where ultimately he died. His burial place in Ilam church was once a place of pilgrimage.

A chapel of Saxon origin, demolished in 1802, once stood attached to the west end of the Collegiate Church of St Mary. After the Dissolution, this building, long respected as St Bertelin's shrine, accommodated the old Grammar School and was used by the Borough Council for almost 200 years as their Council Chamber.

Some few years ago the chapel site was excavated and the Saxon foundations uncovered, together with an ancient wooden cross, thought to be the Saint's original preaching cross. A replica of this now reposes amid the early stones on the exact site where it was discovered. 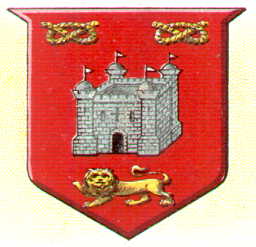 Gules a quadrangular Castle in perspective the four towers domed Argent and each surmounted by a Pennon Or between in chief two Stafford Knots and in base a Lion passant guardant of the last.

These arms were recorded at the Visitation of 1614, certified circa 1953.

Stafford formerly had two castles, one belonging to the King, and the other to the Earls of Stafford. The royal castle, built by William the Conqueror, was held for the King by Robert de Stafford, ancestor of the first Earl of Stafford, who in 1348 built the second castle outside the town. Both castles no longer exist. The royal and feudal elements in Stafford's history a represented by the lion and Stafford knots. The arms carry on the motif of a thirteenth century seal bearing a castle between four lions. The Stafford Knot

The origin of the Stafford Knot is shrouded in the mists of antiquity, but it can be said that the somewhat barbaric tale of a certain sheriff who invented it to hang three criminals with one rope at the same time, may be dismissed as an effort of the imagination. The earliest authentic appearance of the Stafford Knot is on the seal in the British Museum, and this was the property of Joan, Lady of Wake, who died childless in 1443.

Her personal possessions passed to her nephew, Humphrey, Earl of Stafford, who adopted the Knot of Rope, henceforward to be known as the Stafford Knot, as his badge, probably just preceding his creation as Duke of Buckingham in 1444. That he did adopt it from his Aunt is undoubted and she, being a direct descendent of Hereward the Wake, may have had it handed down to her from past generations, through many unknown but doubtless - romantic circumstances.

The Duke of Buckingham and his descendants used this Stafford Knot as personal cognizance. It did not form part of their armorial bearings, which were personal to themselves, but it was their badge and they gave the knot of rope to their retainers and servants as a livery and means of recognition.

The townsmen of Stafford were leigemen of the Stafford family, and as such also used this badge. As the days of feudalism passed and individual and civic liberties grew, it was gradually adopted by the Citizens, Freemen and Burgesses until ultimately it was included in the borough coat of arms.

Literature : Image and information provided by the Stafford council : www.staffordbc.gov.uk