From Heraldry of the World
Your site history : Stamford
Jump to navigation Jump to search 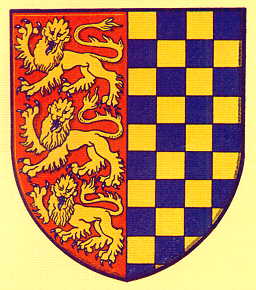 Per pale dexter side Gules three Lions passant guardant in pale Or and the sinister side chequy Or and Azure.

The arms were officially recorded at the Visitation of 1634 for the former Borough of Stamford. The arms were described in 1634 "England, impaling Warrenne".

The blue and gold chequers are those of the Earls Warenne, who held the Manor in the 13th century. The three gold lions on red, like the English Royal arms, were probably used as a token that Stamford was a royal borough.

Tradition says that the town's fifteenth-century seal bears the arms of England (together with those of the Earls of Surrey, former lords of the town) as a reward for good services rendered by the men of Stamford at the Battle of Loosecoat Field (1469), but there is no supporting evidence for this.