From Heraldry of the World
Your site history : Stockton
Jump to navigation Jump to search 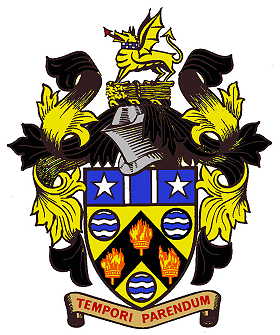 Arms : Or on a Chevron Sable between three Fountains as many Cressets Gold enflamed proper on a Chief Azure two Pallets between as many Mullets Argent.
Crest : a Wreath of the Colours upon a Garb fesswise Or a Dragon statant Gold gorged with a Collar counter-compony Argent and Azure.
Motto: 'TEMPORI PARENDUM' - We must move with the times

The arms were officially granted on February 10, 1958.