From Heraldry of the World
Your site history : Stockton-on-Tees
Jump to navigation Jump to search 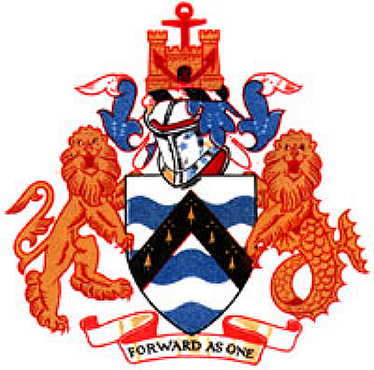 Arms : Barry wavy of six Argent and Azure overall a Chevron Pean.
Crest : On a Wreath Argent and Sable a Gateway embattled between two Towers Or the Portcullis raised Sable enfilling the portal an Anchor erect Gules; Mantled Azure double Argent.
Supporters : On the dexter a Lion guardant and on the sinister a Sealion also guardant all Or.
Motto: 'FORWARD AS ONE'

The arms were officially granted on August 4, 1976.

The background of six white and blue waves represents the river Tees, over which a chevron with five golden tails is placed to represent the corporate identity of the five areas which came together to make up the Borough of Stockton-on-Tees.

The golden castle in the crest represents the two former castles of Stockton-on-Tees and Stokesley Rural District Council, the anchor, whilst distinguishing the castle from that depicted on other arms, associates Stockton with its historic port and seafaring traditions.

The lion supporter represents the former areas of Thornaby-on-Tees and Billingham and is depicted full face; on the right of the shield a sealion represents Seal Sands and the former Stockton Rural District Council and is similarly shown full face.

The parish of Ingleby Barwick in the district also has its own arms. 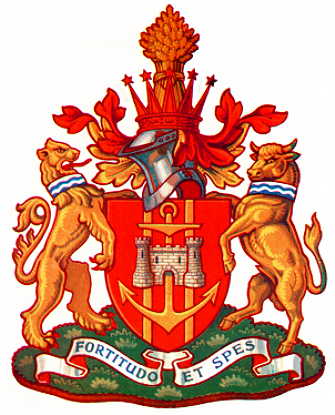 Arms : Gules two Pallets surmounted by an Anchor Or over all a Castle the Portcullis raised proper.
Crest : Issuant from a Celestial Crown Gules a Garb Or; Mantled Gules doubled Or.
Supporters : On the dexter side a Lion and on the sinister side a Bull Or each gorged with a Collar barry wavy Argent and Azure.
Motto: 'FORTITUDO ET SPES' - Endurance and hope

The castle is taken from the town badge which had been used by the Corporation for many years, and doubtless represents Stockton Castle, which existed until 1671. It is a reminder of the close connection which was established with the succession of Prince Bishops of Durham up to that time. The anchor, also from the town badge, indicates the fact that the town is a port and the two gold parallel lines are indicative of the town's association with the Stockton and Darlington Railway, the world's first passenger railway.

The celestial crown denotes that the land on which Stockton is built formerly belonged to the Church and the wheatsheaf is symbolic of the town's ancient markets and its long tradition as a centre for the sale of agricultural produce.

The lion stands for England, and the bull represents the stock side of agriculture and the town's weekly cattle market. The collars of silver and blue on each of the supporters represent the River Tees, on the banks of which the town stands.