From Heraldry of the World
Your site history : Stornoway
Jump to navigation Jump to search 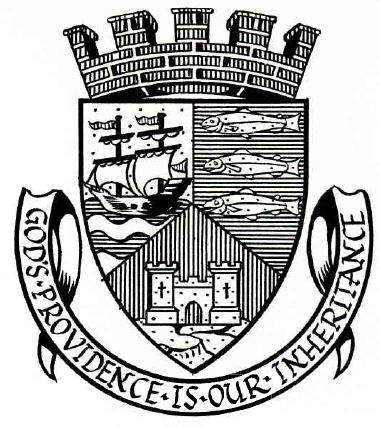 Tierced in pairle reversed: 1st, per fess wavy: in chief Or, in base undy Azure and Argent, a twomasted ship Proper, her jib and mainsail Argent, pennons Gules; 2nd, Azure, three fish naiant Or; 3rd, Gules, a castle of two towers upon a rock in base Or.

Below the Shield which is ensigned of a mural coronet proper to a Burgh of Barony (videlicet: Gules masoned Argent) is placed in an Escrol this Motto "God's Providence is our Inheritance".

Stornoway was created a Burgh of Barony in 1607 and became a Police Burgh in 1863.

The arms are based on the Burgh seal from 1892; the ship and the fish symbolise the fishing industry and the castle is the old Castle of Stornoway.

The colours used recall the three main families who have owned the Island of Lewis, in the first part the gold and blue of the Macleods, in the second the blue and gold of the Mackenzies and in the third, the red and gold of the Mathesons of Achany. This also recalls that Sir James Matheson bought the Island in 1844 from the Mackenzies and erected the present Castle of Stornoway. The castle rock was coloured gold in accordance with a late nineteenth-century document in the Burgh archives.

The motto comes from the most remarkable armorial achievement for The Incorporated Trades of Stornoway (ten arms, 3, 3, 3 and one in base) registered in 1772 .