From Heraldry of the World
Your site history : Stretford
Jump to navigation Jump to search 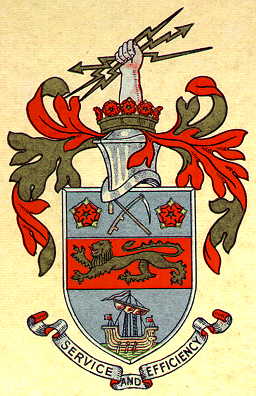 Arms : Argent on a Fesse Gules between in chief a Flail and a Scythe in saltire proper between two Roses of the second barbed and seeded and in base upon Waves of the Sea a Lymphad sail furled oars in action proper a Lion passant Or.
Crest : Issuant from a Coronet composed of eight Roses as in the Arms set upon a Rim Or a Cubit Arm the Hand proper grasping a Thunderbolt Gold, Mantled Gules doubled Or.
Motto: 'SERVICE AND EFFICIENCY'

The arms were officially granted on February 20, 1933.

The flail is from the crest of the de Trafford family and the lion stands for John of Gaunt. The roses are for Lancashire and the scythe recalls the agricultural nature of the area in the past. The lymphad indicates Stretford's long association with the sea by means of the rivers Mersey and Irwell.

The thunderbolt represents the town's industrial development, in which electricity has played a major role.