From Heraldry of the World
Your site history : Surrey Heath
Jump to navigation Jump to search 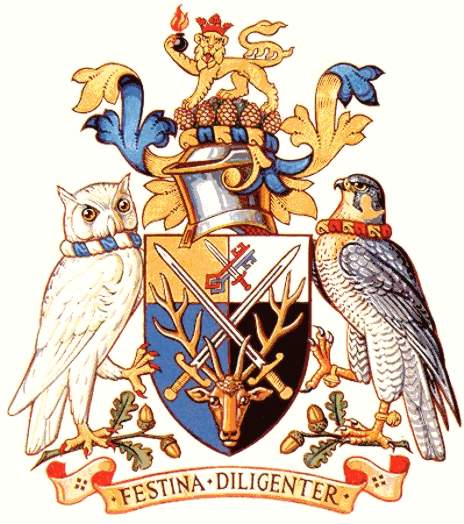 Arms : Per pale Azure and Sable a Chief per pale Or and Argent over all a Stag's Head caboshed the attires interlaced with two Swords in saltire proper points upward hilts and pomels Or in chief a Sword in bend proper hilt and pomel Gules enfiling two Keys in bend sinister addorsed the bows interlaced the upper Gules the lower Azure.
Crest : On a Wreath Or and Azure on a Mount of Heath proper environed of eight Fir Cones erect a Lion passant guardant Or crowned Gules and holding in the dexter paw a Grenade Sable fired proper.
Supporters : On the dexter side an Owl Argent membered Or claws Gules gorged with a Wreath Argent and Azure and on the sinister side a Falcon proper belled Or and gorged with a Wreath Or and Gules each resting the exterior claw on a Sprig of Oak fructed of two Acorns proper.
Motto: 'FESTINA DILIGENTER' - Make hast carefully.

The arms were officially granted on September 20, 1974.

The shield represents a Surrey district comprising the areas of Bagshot and Frimley and Camberley, combining elements from the arms of the former urban and rural districts and Surrey County Council]]. The background is divided vertically into blue and black like the shield of the Surrey County Council.

The chief is divided into gold and white like the shield of Chertsey Abbey, which, being connected with the history of the whole area, is commemorated in the arms of both Councils; Bagshot has the gold and white background, while Frimley and Camberley has the keys and sword of St Peter and St Paul, shown in the new shield on the gold and white chief. Overlying the shield pattern are two crossed swords with gold hilts, interlaced with the antlers of a stag's head in its natural colours. These are principal emblems in the previous Councils' arms, the crossed swords of the Army badge indicating the importance of the Royal Military Academy at Sandhurst and the Staff College at Camberley and the former military camp at Chobham; the stag 's head alludes to Bagshot Park, a royal demesne since Norman times, and to the fact that much of the district was formerly part of Windsor Forest. The interlacing of the swords with the antlers symbolises the union of the two districts.

Above the shield is the closed helm proper to civic arms, with its crest-wreath and decorative mantling in the principal colour and metal of the arms, blue and gold, the ancient liveries of the Warenne Earls of Surrey and the County Council. Upon the wreaths stands the crest, combining emblems from the two Councils' arms. At the base of a circle of fir cones from the crest of Bagshot encloses a mound of heathland in reference to Bagshot Heath; on it stands the royal lion from the Bagshot arms, crowned with a red crown like the Stanhope lion in Frimley and Camberley crest. The latter holds a grenade or fire-ball, and this is shown in the royal lion's forepaw.

The supporters are both taken from the existing arms. The white owl is one of the three in the Frimley and Camberley shield, alluding to the Le Marchant baronets of Chobham, one of whom was first Lieutenant-Governor of the Royal Military College. As in the Council's shield, the owl stands on a sprig of oak, the Surrey badge. On the other side is the falcon from the crest of Bagshot; here it reverts to its original function as a supporter, being that of the Earls of Onslow. Like the owl, it stands on a sprig of oak. Each is wreathed about the neck with the livery colours of the arms of the two Councils, white and blue for Frimley and Camberley, gold and red for Bagshot.

The motto, Festina Diligenter (literally 'Make Haste Carefully'), is derived from the Onslow motto and that of Bagshot, and its importance here is the ideal of progress with speed and efficiency.