From Heraldry of the World
Your site history : Sutherland
Jump to navigation Jump to search 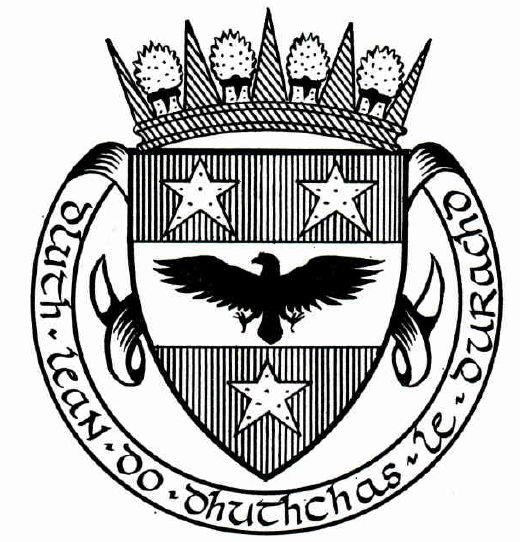 Gules, on a fess Argent, between three mullets Or, a raven displayed Sable.

Below the Shield, whichis ensigned of the coronet proper to a County Council, is placed in an Escrol this Motto "Dluth Lean Do Dhuthchas Le Durachd".

The arms show a black raven, an important badge for the Vikings and part of the Jarldom of Sudrland (South-land), the medieval predecessor of the region. The stars are taken from the historical arms of Moray, Hugh of Moray, Lord of Sutherland in the 13th century, bore three golden stars on red. These are taken in the arms as being the oldest heraldic devise of a Lord of Sutherland. 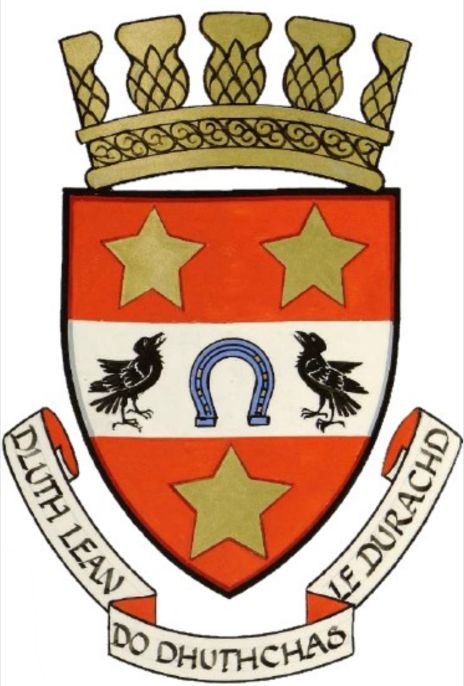 Gules, on a fess Argent between three mullets Or, a horse-shoe Azure, having seven horse-nails of the Third, between two ravens respectant Sable.

Above the Shield is placed a Coronet appropriate to a statutory District Council, videlicet:- a circlet richly chased from which are issuant eight thistle-heads (three and two halves visible) Or, and in an Escrol below the Shield this Motto "Dluth Lean Do Dhuthchas Le Durachd".

The arms are largely based on the arms of Sutherland County Council, which covered more or less the same area. Instead of one raven, a horseshoe and a second raven were added. The horseshoe is taken from the old arms of Dornoch. The motto is also taken from the county arms.