From Heraldry of the World
Your site history : Sutton (London Borough)
Jump to navigation Jump to search 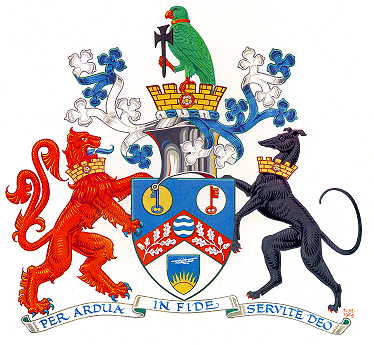 ARMS: Per chevron Azure and Argent on a Chevron Gules between in chief a Bezant and a Plate each charged with a Key wards upward and outward the dexter Azure the sinister Gules and in base an inescutcheon of the first charged with a representation of an Hannibal Aircraft volant Argent and in base a rising Sun Or a Fountain between two Sprigs of Oak leaved and fructed Argent.
CREST: On a Wreath of the Colours perched on a Mural Crown Or charged with a Rose Gules thereon another Argent barbed and seeded a Popinjay proper gorged Gules holding in the dexter claw a Cross formy fitchy Sable.
SUPPORTERS: On the dexter side a Lion queue fourché Gules and on the sinister side a Greyhound Sable each gorged with a Mural Crown Or charged with Rose Gules thereon another Argent barbed and seeded proper.
MOTTO: 'PER ARDUA IN FIDE SERVITE DEO

The three parts of the shield represent the authorities which merged to form the London borough of Sutton.

The gold and silver discs in the top third are from the arms of the Borough of Sutton and Cheam. The keys symbolise the ownership of Sutton by the Abbey of Chertsey at the time of the Domesday survey (compare with Croydon) , while the Popinjay is from the arms of the Lumleys, former lords of the manor in Cheam. The black cross represents the See of Canterbury, which held Cheam from the time of Canute. The base of the shield incorporates the shield of the Borough of Beddington and Wallington - with a Hannibal airliner to symbolise Croydon Airport. Carshalton is represented in the chevron, with heraldic depictions of the ponds and oak trees. The double tailed lion and black greyhound are from the arms of former lords of the manor of Stone Court.


The Borough's motto also incorporates elements from the earlier authorities. The motto - per adua in fide servite Deo - means: through difficulties serve God in faith.