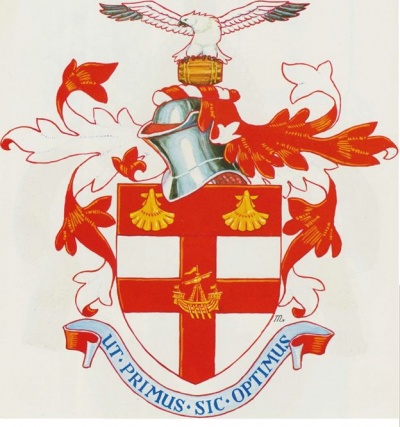 Arms : Argent, on a Cross Gules a Lymphad Or, on a Chief of the second two Escallops Gold.
Crest: On a Wreath of the Colours, a Sea Eagle displayed perched on a Rum Barrel all proper.
Motto: 'Ut Primus Sic Optimus'

The Shield is dominated by a Red Cross referring to the primary object of the Hospital, humanitarianism and healing. In the centre of the cross the lymphad, or galleon, suggests the Hospital's association with the early fleets and its location at a seaport, and refers also to the lymphad in the Arms of Macquarie himself. The gold escallops on the Chief are taken from the Arms of Thomas Townshend, Viscount Sydney, after whom the City of Sydney was named, and whose Arms are incorporated in the arms of the city of Sydney.

The Crest consists of an eagle perched on a rum barrel, the latter referring to the rum currency which financed the building of the Hospital.

The eagle is the sea eagle, indigenous to the east coast of Australia, which, in legend, has the capacity for rejuvenation by diving into the sea.