From Heraldry of the World
Your site history : Tadcaster
Jump to navigation Jump to search 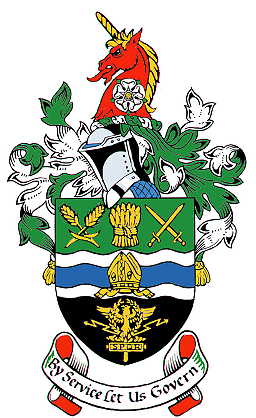 Arms : Per fesse Vert and Sable on a Fesse wavy Argent between in chief a Garb between two Stalks of Barley and as many Swords both in saltire and in base a representation of the Head of a Roman Centurion's Standard with the letters SPQR thunderbolt laurel wreath and eagle displayed of Gold a Bar wavy Azure over all on the fesse a Mitre Gold.
Crest : On a Wreath of the Colours in front of a Unicorn's Head erased Gules armed and crined Or a Rose Argent barbed and seeded proper; Mantled Vert lined argent.
Motto: 'BY SERVICE LET US GOVERN'

The green at the head of the shield and the gold wheatsheaf represent the district's predominantly rural character. The black of the lower half refers to the mining in its southern portion. The golden ears of barley typify the town's well-known malting and brewing industries and the two gold swords relate to Towton where the famous battle, during the Wars of the Roses, was fought in 1461 and where more than 30,000 men were slain.

The white and blue wavy bars represent the River Wharfe and the gold mitre alludes to Bishopthorpe, where since the 13th Century the palace of the Archbishops of York has been. The head of a Roman centurion's standard, also in gold, indicates that Tadcaster was founded by the Romans, who gave it the name Calcaria, and it became an important outpost to the military headquarters at York.

The red unicorn's head with golden horn and mane is from the arms of the Earls of Londesborough, lords of the manor of Tadcaster and the white rose is for the County of Yorkshire.