From Heraldry of the World
Your site history : Taff-Ely
Jump to navigation Jump to search 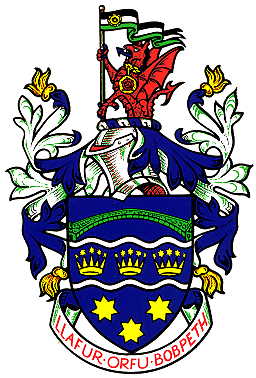 Arms: Azure between two Barrulets wavy Argent three Celestial Crowns Or in chief a representation of the Old Bridge at Pontypridd issuant proper and in base three Mullets of seven points two and one Or.
Crest: On a Wreath of the Colours a demi Dragon Gules gorged with a Chain Or pendant therefrom a Bezant thereon a Rose Gules charged with another Argent both barbed and seeded and supporting a Staff proper flying therefrom a three-tongued Pennon tierced in fess Sable Argent and Vert and charged in the hoist with a Cogwheel Or.
Motto: 'LLAFUR ORFU BOBPETH' - Hard work conquers everything.

The arms were officially granted on February 10, 1976.

The two white waves represent the Taff and Ely, the two rivers which give the Borough its name. Over the top wave stands the Old Bridge of Pontypridd spanning the Taff, from the seal of the Pontypridd UDC. Below the other wave, running parallel, represents the Ely, flowing through the Llantrisant and Llantwit Fardre area.

The three golden celestial crowns symbolize Llantrisant (Church of the Three Saints) - Saints Illtyd, Gwynno and Dyfodwg. The three golden stars denote St. Illtyd, the famous astronomer from whom Llantwit (Llanilltyd) is named. Previously borne with six points, upon the arms of the Llantrisant and Llantwit Fadre RDC, the stars are here given seven to represent the seven additional parts of the Caerphilly and Cowbridge Rural Districts, which complete the Borough area. The whole is set on a background of blue, appropriate to the symbolism of the crowns and stars.

The crest is based on that of the Llantrisant and Llantwit Fardre RDC, the red dragon holds a staff supporting a triple-forked pennon of black, white and green denoting coalmining, limestone quarrying and agriculture, and the gold cogwheel represents the industries - of the Treforest Estate and the Maritime Estate. The gold chain around its neck is a reminder of a former major industry in Pontypridd, from which hangs a gold roundel charged with a Tudor Rose. The roundel is a 'bezant' (originally a gold coin from Byzantium), and refers to the location of the Royal Mint in the area. It is charged with a Tudor Rose from, the arms of Glamorgan, which is also an emblem in the device of the Mint.

The motto, that of Llantrisant and Llantwit Fardre RDC, is derived from a quotation from Virgil and in its Welsh form is the motto of the Rhys-Williams family of Miskin.