From Heraldry of the World
Your site history : Taiwan
Jump to navigation Jump to search 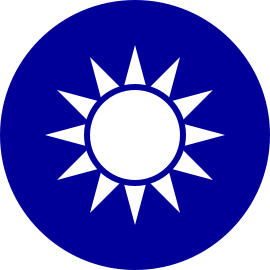 Taiwan does not use a coat of arms, but the above symbol or emblem. In the "Blue Sky with a White Sun" symbol, the twelve rays of the white Sun representing the twelve months and the twelve traditional Chinese hours (時辰), each of which corresponds to two modern hours and symbolizes the spirit of progress.