From Heraldry of the World
Your site history : Tamworth (Staffordshire)
Jump to navigation Jump to search 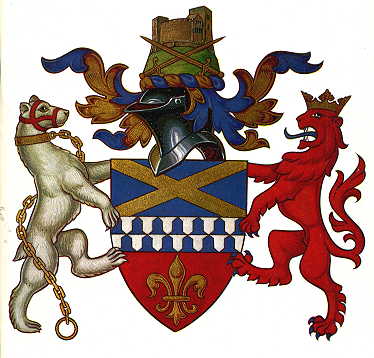 Arms : Per fess Azure and Gules a Fess Vair between in chief a Saltire and in base a Fleur-de-Lis Or.
Crest : On a Wreath of the Colours infront of a Mount Vert thereon a representation of Tamworth Castle proper two Swords in saltire Or.
Supporters : On the dexter side a Bear Argent muzzled Gules collared and chained Or and on the sinister side a Lion Gules crowned Or.

At the top of the shield are the attributed arms of the Anglo-Saxon kingdom of Mercia - Azure a Saltire Or. These arms are now used by the City of St. Albans. They are featured at the top of Tamworth's shield as the town was once the capital of Mercia. At the foot of the shield is a fleur-de-lis from the borough's seventeenth century seal. Between these is afesse of vair from the arms of the de Marmion family, Lords of Tamworth from 1014 - 1291.

The crest represents the achievements of the de Marmions. They built Tamworth Castle and became the hereditary Champions of England, hence the crossed swords.

Until 1889 the town lay half in Warwickshire and half in Staffordshire, when the whole of the town was included in the latter county. The supporters represent the two counties historically associated with the town. The muzzled bear is derived from the Earls of Warwick and forms the main charge in the arms of Warwickshire County Council. The red lion comes from the arms of the Earls of Stafford and is one of the supporters of the arms of Staffordshire County Council.