From Heraldry of the World
Your site history : Tandridge
Jump to navigation Jump to search 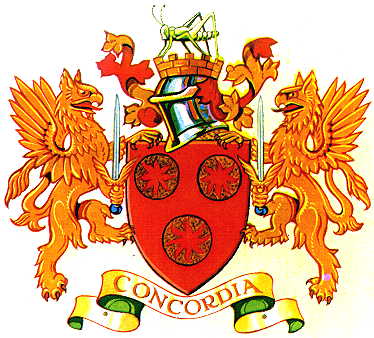 Arms : Gules three Bezants each charged with an Estoile of eight rays also Gules.
Crest : Upon a Mural Crown Or a Grasshopper Vert Mantled Gules doubled Or.
Supporters : On either side a Griffin Or holding a Sword erect proper the quillons formed of a Vol Or the pommel Azure.
Motto: 'CONCORDIA' - Harmony

The red shield with three gold bezants or roundels of gold, is taken from the seal of the Augustianian Priory of St James at Tandridge, which flourished from about 1200 until 1537. Each roundel is charged with a red estoile with eight rays - the estoile is an allusion to the arms of the family of Cobham of Lingfield.

The crest consists of a mural crown in gold, which is symbolic of municipal government, as well as of military defence. Upon the crown is a green grasshopper, an allusion to the crest of the Gresham family, which owned a number of manors within the District. The mantling flowing down from the crest on either side of the helm is doubled red and gold.

The supporters are gold griffins, which are taken from the Arms of the Evelyn family, who were connected with Godstone and Felbridge during the 16th and 18th centuries. Each griffin holds a blue winged sword, an allusion to Kenley Aerodrome, established in 1917 and an important fighter station during World War II.

The Motto is "Concordia" meaning harmony