From Heraldry of the World
Your site history : Tasmania
Jump to navigation Jump to search 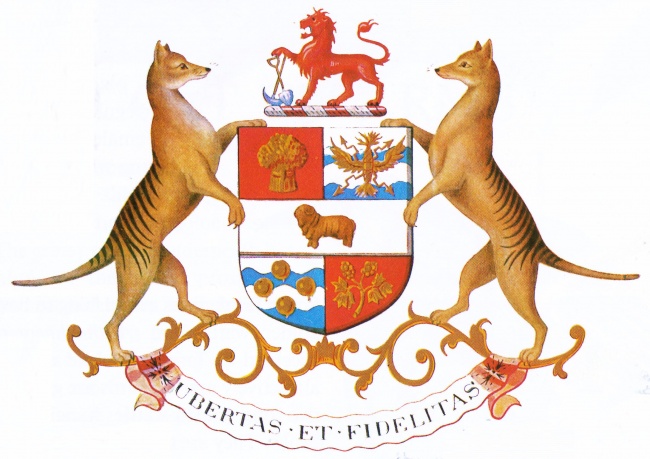 Arms : Quarterly Gules and barry wavy Argent and Azure, a Fesse of the second charged with a Ram statant proper between in chief a Garb and a Thunderbolt and in base four Apples and a branch of Hops all Or.
Crest : On a Wreath Argent and Gules, a Lion statant Gules, resting the dexter fore-paw on a Spade and a Pick-axe in saltire proper.
Supporters : On either side a Tasmanian Tiger proper.
Motto: 'Ubertas et Fidelitas'.

The main agricultural industries in the state are shown on the arms; a ram, a sheaf of wheat, the apples and a branch of hops. The thunderbolt refers to the island's hydroelectrical power stations. The mining industry is represented by the tools held by the lion.


The motto means Fertility and faithfulness.

Before the arms of Tasmania showed only a red lion :