From Heraldry of the World
Your site history : Tayside
Jump to navigation Jump to search 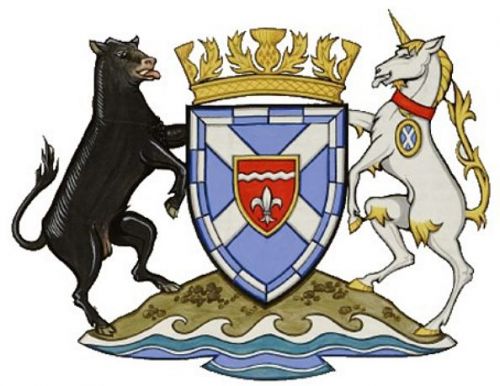 Azure, a saltire Argent, surmounted at the fess point by an inescutcheon Gules, fimbriated Or, and charged with a fteur-de-lis Argent and in chief a bar wavy of the Last, a bor­ dure counter-compony of the First and Second.

Above the Shield is placed a coronet appropriate to a statutory Region, videlicet:- a circlet richly chased, from which are issuant four thistles leaved (one and two halves visible) Or; and on a Compartment below the Shield are set for Supporters, dexter, an Angus bull Proper, and sinister, a unicorn Argent, armed, maned and unguled Or, and gorged with a collar Gules, from which is pendant an oval badge Azure, fimbriated Or, charged with a saltire Argent.

The arms shows a St. Andrew's cross for Scotland within a bordure and a red esutcheon. The wavy bar on the escutcheon symbolises the Tay river. The fleur-de-lis is taken from the arms of the city of Dundee, where the council hasits seat. The supporters are the unicorn common to all Regional Councils, and an Angus Bull, the famous breed of the region. The compartment shows the sea.

The Tayside Region was divided into three districts : Angus, Dundee, Perth and Kinross