From Heraldry of the World
Your site history : Teignbridge
Jump to navigation Jump to search 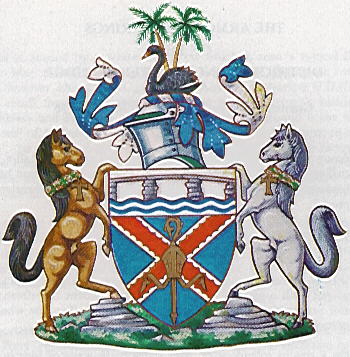 Arms : Azure on a Saltire Argent another engrailed Gules over all a Mitre affrontée enfiled by a Crosier in pale Or on a Chief Argent over two Barrulets wavy in base Azure a representation of a Devon Clapperbridge of three spans throughout proper.
Crest : On a Wreath of the Colours in front of two Palm Trees a Black Swan close naiant proper.
Supporters : On the dexter side a Dartmoor Pony and on the sinister side a Grey Mare each gorged with a Garland of Heather proper pendent therefrom a Tau Cross Or and resting the interior hind hoof on a Devon Tor the whole upon a Compartment of Moorland proper.

The shield is headed by a white 'chief' on which it is seen a typical Dartmoor 'clapper' bridge over two blue waves, indicating the name Teignbridge. Below are emblems taken from the devices of Newton Abbot U.D.C. and Teignmouth U.D.C., which recall the considerable part played in the District's history by the See (office or jurisdiction of bishop) of Exeter, Torre Abbey and Buckfast Abbey. On the blue background is the white St. Andrew's cross from the seal of Ashburton, whose manor was held by the Bishops; on it lies another such cross or 'saltire', the red one from the device of Teignmouth which is thought to derive from the arms of the Exeter Diocesan Treasurers. Overlying the saltires is a gold erect crosier like those in the arms of Buckfast Abbey and the device of Newton Abbot, thrust through the gold mitre from the latter, which recall the tenure of the town by the Abbots of Torre.

The crest typifies the seaside areas of Dawlish and Teignmouth. In front of two palm-trees, which are plentiful in both towns and indicate the beneficient climate, is the well-known Dawlish black swan. The swan and palm-tree are used as a motif by the Dawlish Hotels and Caterers' Association.

The supporters symbolise the rural areas of Newton Abbot and St. Thomas. On the left is a Dartmoor Pony, representing the National Park and Forest common to both districts; on the right is the world-famous "Tom Pearce's Grey Mare". Each, for necessary differentiation from other supporters, has round the neck a garland of heather for the moorland, suggested by the sprig of heather in the pony's mouth in the County crest. From this hangs a gold Tau cross, giving the initial T.

Instead of having a scroll with a motto, the arms may stand on a special base or 'compartment'. Here the pony and grey mare appropriately stand on a base representing the moorland of the district, with each beast resting a hind hoof on a typical Tor.