From Heraldry of the World
Your site history : Tendring
Jump to navigation Jump to search 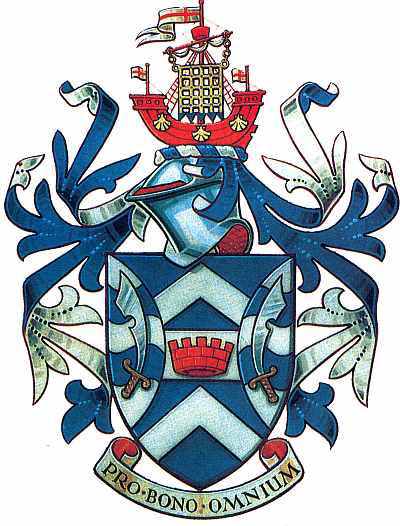 Arms : Azure on a Fess between two Chevrons Argent a Mural Crown Gules all between two Flaunches Argent each charged with two Bars wavy Azure surmounted of a Seax point upwards proper hilt and pommel Or.
Crest : On a Wreath of the Colours an Ancient Ship Gules sail furled proper flying flags and forked pennon of St. George and charged on the hull with three Escallops Or pendent from the yardarm by chains a Portcullis Or nailed and spiked Azure.
Motto: 'PRO BONO OMNIUM' - For the good of all

The arms were officially granted on November 27, 1975.

The shield represents the district of Tendring, which until the reorganisation of local government in April 1974, was split into five smaller authorities on the Essex coast. The centre of the shield bears the coat of arms of the Tendring family, which was formerly used by Tendring Rural District Council. This is blue with a white band between two white chevrons and refers specifically to the name of the district.

On the centre point is a mural (walled) crown of five visible crenellations suggesting the union of five authorities in one civic unit. The crown is red, the background of the Essex arms; and at the sides white and blue waves overlaid by the Saxon swords or "seaxes" from the county arms (as seen in the Frinton and Walton device) suggest the Essex coastal area.

The crest is based on the arms of Harwich and Clacton with a reference to Frinton, Walton and Brightlingsea. The ancient ship combines features of the ships in the crests of Harwich and Clacton. It is red (as at Clacton) with sail furled (as at Harwich), and is charged on the hull with the three gold scallop shells (Clacton) which allude to the seaside resorts of Frinton, Walton and Brightlingsea. Hanging from the mast is the gold portcullis from the ancient seal and arms of Harwich and the ship's flags and pennon are those of St. George of England which, with the portcullis, indicate the importance of this area in former times, in defending the Eastern Approaches.

The motto, based on Harwich's motto OMNIA BONA BONIS is PRO BONO OMNIUM which means "For the good of all" and indicates the council's concern for all the people of the Tendring district.