From Heraldry of the World
Your site history : Test Valley
Jump to navigation Jump to search 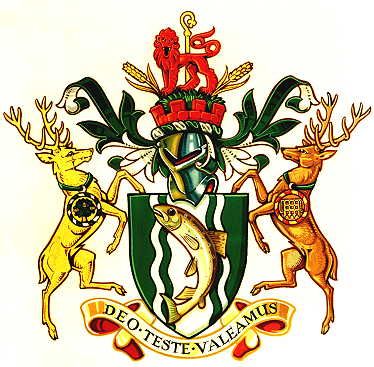 Arms : Vert a Pale cotised all wavy Argent over all a Trout leaping to the dexter proper.
Crest : On a Wreath of the Colours out of a Mural Crown Gules a Mount Vert thereon between two Stalks of Wheat leaved and issuant in front of a Crosier erect the head to the sinister Or a Lion statant guardant Gules.
Supporters : On the dexter side a Hart Royal Or gorged with a Riband Vert pendent therefrom by a ring Argent a circular Torse Argent and Vert enclosing an Oak Tree throughout and on the sinister side a Hart Royal proper gorged with a like Riband pendent therefrom by a like ring a circular Torse Or and Gules enclosing a Portcullis throughout chained Or.
Motto: 'DEO TESTE VALEAMUS' - With God as our witness, let us be strong.

The shield shows the Test river and its tributaries, as well as a brown trout, a typical fish for the rivers.

The motto ´Deo Teste Valeamus' means 'With God as our witness, let us be strong'.