From Heraldry of the World
Your site history : Tettenhall
Jump to navigation Jump to search 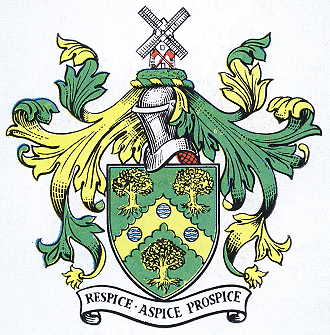 Arms : Vert on a Chevron engrailed between three Oak Trees eradicated Or as many Fountains.
Crest : On a Wreath Or and Vert upon a Mount of the last in front of two Battle-Axes in saltire Gules a Windmill Argent.
Motto: 'RESPICE ASPICE PROSPICE' - Look to the past, the present and the future.

The arms were officially granted on September 29, 1938.

The trees refer to the three royal forests of Kinver, Brewood and Cannock, which met at Tettenhall. The heraldic fountains represent the watershed and streams of the district, flowing into two oceans.

The windmill, representing structures once common in the area, stands for its windy and healthly heights. The axes refer to the battle of Tettenhall in 910, when King Edward the Elder defeated the Danes.