From Heraldry of the World
Your site history : Tewkesbury
Jump to navigation Jump to search 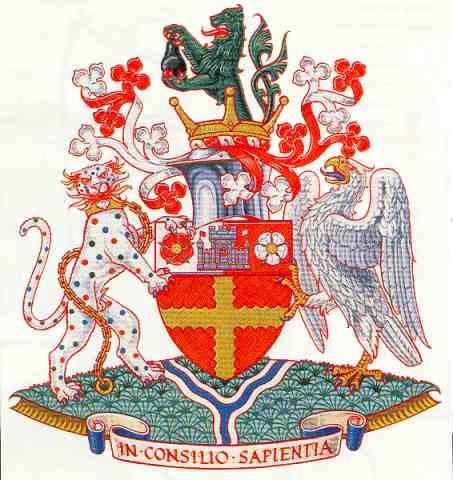 Arms : Gules a Cross engrailed Or on a Chief per pale Argent and Gules a Castle proper flying from each flanking Turret a Flag counter-changed between two Roses counterchanged barbed and seeded proper.
Crest : On a Wreath Argent and Gules out of a Saxon Crown Or a demi Lion double-queued Vert holding in the paws a Pear Sable.
Supporters : On the dexter side a Panther guardant Argent semy of Torteaux Hurts and Pomeis alternately issuant from the mouth and ears Flames proper collared with a Chain reflexed over the back Or and on the sinister side an Eagle wings expanded and inverted Argent beaked and legged Or; upon a Compartment Vert a Pall wavy Argent charged with another Azure.
Motto: 'IN CONSILIO SAPIENTIA' - There is wisdom in Counsel

In the crest a green demi lion with two tails from the arms of Dudley, Earl of Leicester - who was responsible for obtaining for the Borough the first Royal Charter of Incorporation in 1574 - issues from a Saxon crown, denoting a Royal Borough with Saxon origin and holds between the paws a black pear from the arms of Sir George Dowty.

The supporters are an heraldic panther from the arms of the Duke of Beaufort and an eagle from the arms of the Earl of Coventry, both families having a long association with the Borough. The first High Steward appointed in 1574 was the Duke of Beaufort. The shield and supporters rest on the compartment in which symbolic reference is made to the convergence at Tewkesbury of the Rivers Severn and Avon. Both of these rivers having played and still do, a most important role in the life of the Borough.