From Heraldry of the World
Your site history : Thamesdown
Jump to navigation Jump to search 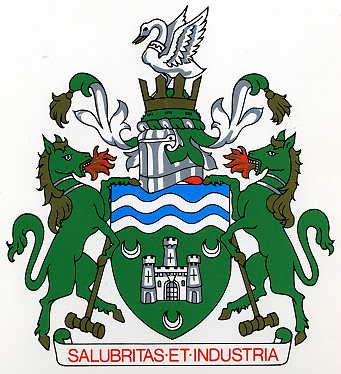 Arms : Vert a Castle of three towers between three Crescents Argent a Chief barry wavy of four Azure and Argent.
Crest : On a Wreath of the Colours Upon a Mount Vert enfiling a Crown Vallary Or a Swan rousant proper gorged with a Collar per f ess embattled Sable and Argent.
Supporters : On either side a Horse Vert crined and unguled Or breathing flames proper gorged with a Collar gemel Argent and resting the exterior forehoof on a Hammer head downwards Or.
Motto: 'SALUBRITAS ET INDUSTRIA' - Health and industry.

The background of the shield symbolizes the name Thamesdown, with the green of the downs and countryside surrounding Swindon and Highworth. The four waves of blue and silver represent the River Thames in the north of the district. The three-towered castle and three crescents are derived from the arms of the Goddard and Vilett families, manorial owners in Swindon. In the former Borough of Swindon arms the three crescents were shown in the reverse of their actual colouring to appear red on silver, whereas in the Goddard arms they are silver on red. The Viletts were represented in the Swindon Arms by three castles of two towers each. One of these castles is shown in the Thamesdown arms, with an extra tower - that from the base of the Highworth RDCarms - representing ancient strongholds in the area.

The crest is a further symbolisation of Thamesdown, based on the crest and shield of the Highworth RDC. The stockaded crown on a hill indicates the "high north" (settlement); the hill stands for the downs, and the swan, as in the Highworth arms, for the River Thames. The swan's collar with the black and silver circlet is from Highworth's crest, derived from the arms of the Warneford family. The railway is suggested by the "iron horses" breathing fire, with double lines for collars (reminiscent of a railway track). The iron horses are green with gold manes and hooves - the liveries of the former Great Western Railway. They each rest a hoof on a gold hammer, from the Swindon crest and the Highworth shield, representing engineering and other industries.

The motto is that of the former Borough of Swindon and was considered to be suitable for Thamesdown, emphasizing, as it does, the health situation of the whole district in its pleasant setting and the busy and varied activities of both Swindon and Highworth.